Michael Che On Sneakers, Comedy, and the Official Shoe of White People

Shopping for sneakers with the comedian and co-anchor of SNL's Weekend Update.

“There’s a confidence you get when you have on a fresh pair of sneakers,” Michael Che says as he peruses through the cellophane wrapped shoes on the shelves of Stadium Goods in New York City.

The comedian is rarely without a new pair of sneakers, even if they're not visible on TV. While co-anchoring Weekend Update on Saturday Night Live, Che is usually wearing one of the 250 pairs of shoes he has in his collection under the desk—a habit he’s kept since he was a correspondent on The Daily Show.

“No matter what’s going on up here,” Che says as he gestures to his upper body that is usually sporting a suit jacket, shirt, and tie on Saturday nights. “I’ve always got sneakers on. That’s comedy to me.”

Che has even become known for propping his feet up on top of the Update table after signing off, a habit that just occurred randomly. “I just felt like doing it,” he said, adding that he hasn’t shown off his sneakers yet this season.

However, Che did put a lot of thought into the sneakers he wore for his first comedy special, Michael Che Matters, which will debut on Netflix on Nov. 25. In the hour-long stand-up show, Che made the calculated choice to wear white Nike Air Force 1s for the taping.

“I wanted it to make sense 30 years from now,” Che said. “So I wore sneakers that were going to be timeless.”

How did you first get into sneakers?
I don’t remember. Ever since I was a little kid. If you were poor, you could either have decent clothes or shitty clothes and a nice pair of Nikes. You couldn’t afford a gold chain, but you could have sneakers. If you had nice sneakers, you were upper class if you were poor.

Do you remember the first pair of sneakers that got you into it?
I’m the youngest of seven. I have four older brothers. They would be conscious of cool stuff for me before I even knew what was cool. The first time I really went to go get a pair of sneakers, like I really need these sneakers, was the Air Jordan 7s. There was something really cool about Michael Jordan and Bugs Bunny playing basketball together.

How would you describe your taste in sneakers?
I don’t like anything too flashy or crazy. I like these [points at Pinnacle Air Jordan 6] but I could never see myself wearing them. I like classic, simple, clean, sneakers.

Would you consider yourself a purist? Like you only wear original Jordan colorways?
I only wear Jordans that look like they could’ve came out at the time. Like these look like fakes from 27th Street [points at “Nothing But Net” Air Jordan 7s]. Spiz'ikes were the only sneakers I ever waited on line for. I don’t know what I was thinking. If I had known they were going to put them back out.

Is that the craziest thing you’ve ever done for a pair of sneakers?
Hype kind of turns it off for me. I think the craziest thing I’ve ever done for a pair of sneakers is pay too much for sneakers. I’d rather pay too much for them than wait in line for them. I just never like the hype. Sneakers for me isn’t necessarily about the sneakers you have, but more about how new, and clean, and how many you had. Anyone could get one pair of Jordans and just play them out forever. I didn’t need a specific pair of sneakers, I just needed new sneakers.

How have sneakers changed since when you first got into them?
I went to high school on 65th and Amsterdam. We would cut class and go to Niketown and wear the new shoes back to school for lunch time. When you’re in high school, that’s when girls are paying attention to your sneakers. That ends at like 20. Girls don’t care what sneakers you’re wearing.

But, now everything is online. Everyone knows what’s shaking everywhere. Certain places wore certain things, now everyone wears the same thing. The world’s gotten smaller. It’s not as exciting. When I was a kid, we’d never come to a store like this. You’d go on a hunt to some store on Delancey Street that doesn’t even know they have retro Jordan 3s, because no one goes in there.

I guess you’re probably not the type of person to spend the day at a sneaker convention.
Nah. I mean it’s probably fun because it’s a different culture. For me, they just had to be fresh. It doesn't matter if you have on $700 sneakers or $80 sneakers. At the end of the day, they’re just sneakers. You could collect these shits for 30 years and you can only wear them for about seven.

How many pairs do you have?
Probably around 250 or 300. I double and triple up on pairs I like. Sometimes you want to rock some shit from a few years ago.

Do you remember the first pair of sneakers you bought with a real paycheck?
Not really. I was always buying sneakers above my means anyway. With show business it’s so weird because it’s not like one day, you get a big ass check. There’s so many little paydays that just come faster and faster. They come gradually.

Pete Davidson said he asked Kanye for Yeezys when he was a guest on SNL. Have you ever asked guests for the plug?
[laughs] Did he get them?

I don’t think he did.
That’s a funny story because it’s unlike Pete. He’s such a shy, humble kid. I don’t really fuck with the guests honestly. It’s not my favorite thing. I just want to let them be celebrities. You get jaded. When you meet enough people, you just don’t give a fuck. I still like to be like, “Ooh shit, it’s so and so,” but from a distance.

..reminds me of when i met billy clinton, and secret secret service was like "what are those?!"

When did you start showing off your sneakers on Weekend Update?
I haven’t done it this year for some reason. That started off as a joke and then people were picking up on it. Then I didn’t do it and people were messaging me why I wasn’t doing it. I would do morning news and then the anchor would put their feet up like, “I’m going to do the Che.”

Is there ever a moment where you don’t wear sneakers?
When I do a charity event or something like that. But for the most part I’ll wear a nice pair of sneakers. Kids will come to shows now and show me their sneakers and say, “I never wore these before, but I wore them because I came to see your show.” I didn’t expect that. It’s weird, but it’s fun. I almost feel obligated now to not show up in a whack pair of sneakers. It just adds to the game of entertainment. Anything that adds to entertainment, I’m all for it.

What’s your take on sneaker nicknames?
I love them. It’s a very New York thing. I don’t know who gets credit for them, but it’s very New York to me. We used to do it with beef and broc Timberlands and wheat Timberlands. I love the nicknames. That’s fun because everyone could call them different things.

Brands are pre-nicknaming shoes already too.
Yea because they see what the kids are doing and try to monetize it. They just have to let the kids have fun with it, that way it becomes their thing. There should be some kind of ownership. Kind of like when Run DMC had the Shelltoes. Adidas didn’t even know kids were calling it that.

Are you into the idea of rappers getting sneaker deals.
If it’s dope it’s dope. I used to have this thing where I didn’t buy any player’s sneakers that didn’t score 40. But if it’s dope, it’s dope. I liked Kanye’s first Nike sneakers. I’m not ready for the Adidas Yeezys yet. I’m just not there. But, who am I?

Nobody gets the pulse of what’s hot like Kanye. He’s always one step above where it’s not too far where you can’t fuck with it but you also feel like it’s some new shit. The Yeezys out now, I don’t like them, but I don’t diss them because three or four years from now I might want them. He might be too ahead of our time and I’m okay with admitting that.

Congrats on the special by the way. Are you excited for it to come out?
It’s weird because we shot it in August and the country was in such a different place. Everything is so different now and it’s going to seem like we’re forgetting to mention the elephant in the room, but it just wasn’t in the room at the time. I wish I could put a disclaimer that this happened before the election.

I think people might get a kick about how nostalgic it may feel. No matter what side you’re on, you’ve got to admit that the country feels pretty different right now. Good or bad.

Speaking of which, did you hear about how people are reacting to New Balance?
I haven’t.

They came out and supported Trump’s trade policies and a Neo Nazi group came out and claimed the brand as the “official shoes of white people.”
[laughs] Well, yeah. Who didn’t know that?

According to the Nazis.
I don’t trip over that stuff. This is why I don’t like meeting celebrities. Me knowing that about New Balance affects the way I feel about New Balance. Information ruins everything. I like New Balance actually. It’s not my thing, but I have a few pairs.

America is a big country. We’ve got to learn how to live with each other. I really don’t care about your personal politics. If we got into that, I might be butt naked because people will tell you, “This is how Nike makes their sneakers, with these kind of factories, and these kinds of conditions. And this is how Apple makes their products.” You can’t be a hypocrite because if you hold yourself to that standard, you have to hold yourself to that standard the whole way through. A lot of people pick and choose. But if Apple told you the same thing, would you not have an iPhone? I can’t be a hypocrite. 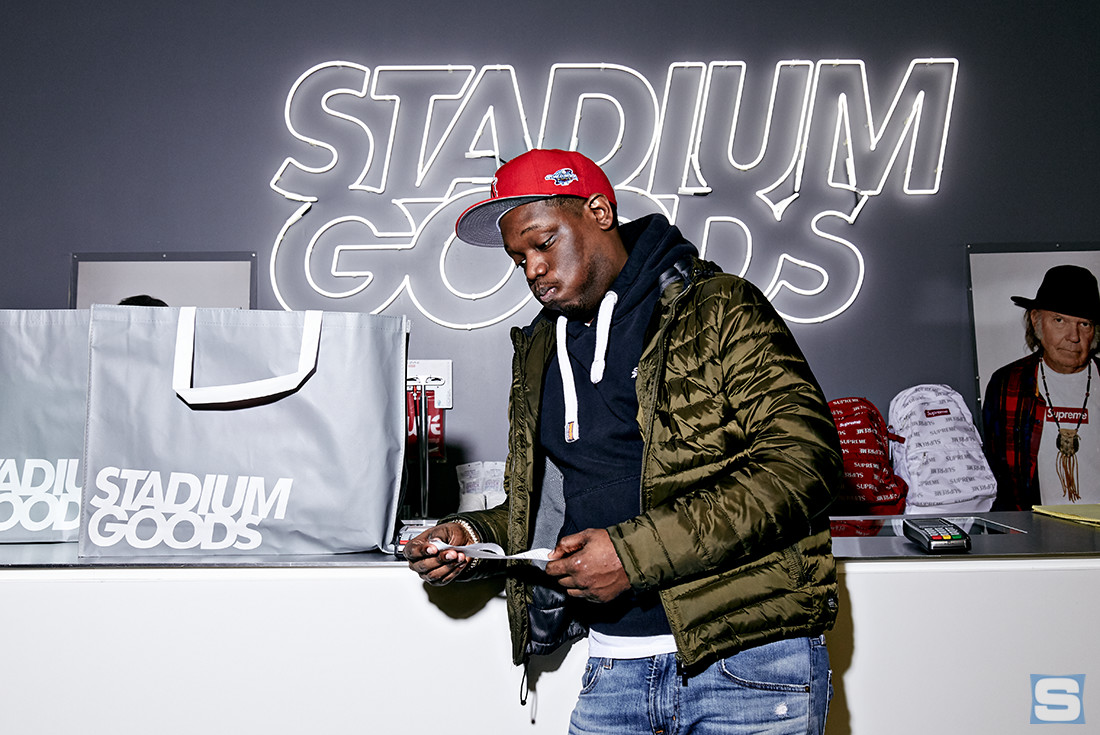